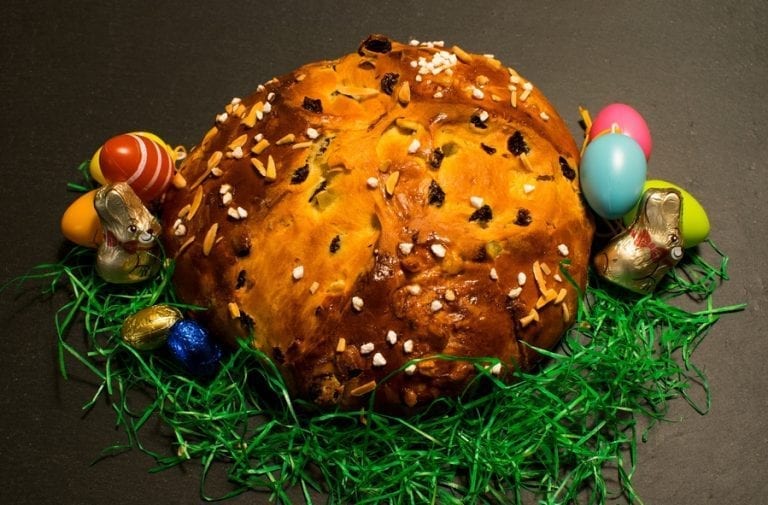 How is Easter celebrated in Switzerland? With lots of chocolate, of course, but also with rice tarts and sweet leavened bread. Here are the typical Swiss specialties of the Easter holiday.

Easter is approaching, and in Switzerland preparations for the celebrations have already begun. In addition to religious meanings, in fact, even in the Swiss country this period represents the arrival of spring, the rebirth of the earth with all its fruits. Many local customs differ according to canton, some recently born and disconnected from the religious significance of the festival: if in the past it was obligatory to install a holy sepulcher in churches (an almost completely disappeared and forgotten ritual), today adults and children await the arrival of the Easter bunny, a carrier of chocolate eggs and surprises.

And it’s always the rabbit (according to tradition) that hides the gifts in the garden during the night, where the little ones can have fun looking for them in a tasty treasure hunt. And speaking of eggs: every year the town of Rougemont hosts 12 giant chocolate eggs, decorated in a theme and displayed in the village as if they were sculptures. Still in the canton of Vaud, in Nyon, a town on Lake Geneva, fountains are painted instead, which in time of celebration become a veritable tourist attraction. In German-speaking Switzerland, on the other hand, eierütschen (literally “egg beating”) takes place, a household challenge that consists of breaking the shell of the opponents’ eggs with the tip of a boiled egg. A tradition that in Berne becomes a public event, complete with an annual race in the historic center.

Eggs aside, on the gastronomic front Easter brings with it a charge of sweetness with several delicious specialties that are full of meaning. There are two typical Sunday recipes that, as always, vary from area to area: a rice tart and zopf. Then there are the many creations in chocolate, from eggs to pralines. A separate chapter, however, should be reserved for bunnies, among the most ancient and fascinating symbols of the festivity.

The tradition of chocolate

Not only a Swiss prerogative, but this is where they undoubtedly find their maximum expression thanks to the deep chocolate tradition of the country: in Swiss towns it’s possible to buy delicious chocolate bunnies (schokohase) custom decorated and perfectly packaged, but especially embellished with the most varied ingredients. From white chocolate to hazelnuts, from almonds to gianduia, from cereals to sugared almonds, there are many products that are added by artisans to make these small chocolate sculptures even more inviting. Swiss mâitre chocolatiers have a true passion for the finest cacao, an ancient tradition that has its roots in the 18th century with the birth of the first shops engaged in the art of confectionery.

The turning point came in 1819 in Vevey, with the opening of the François-Louis Cailler factory, which revolutionized the industry by founding the first (still existing) brand of Swiss chocolate. After the first Cailler experiment, in the whole country, in particular in Geneva, Berne, Zurich and Lucerne, other manufacturers began to arise, and with them came a slew of new products. The second evolution happened again in Vevey, in 1875, the year in which Daniel Peter, after many attempts, finally managed to combine milk with cacao, creating the first milk chocolate, a joy for the palate of children. The industry continued to grow, seeing its period of maximum splendor in the first decades of the 20th century, with the development of tourism.

The bunny rabbit, from Lutherna times to present day

Between eggs and sweet creations of all kinds, at Easter time in Switzerland bunny rabbits dominate the scene. But why the fascination this animal? Among the most famous Easter symbols in the world, the bunny rabbit is a folkloristic figure born with Lutheranism in Germany, conceived to play the role of the judge, with the duty to assess whether the children had been good or disobedient during the astertide, or the period that goes from Easter Sunday to Pentecost. A sort of spring version of Santa Claus, bearer of gifts during the night preceding the morning of celebration. Among the first volumes to mention this character, De ovis paschalibus (“On Easter Eggs”) by Georg Franck von Franckenau of 1682, tells of a hare loaded with eggs for the children. In fact, the term used in ancient texts speaks of a hare, but over the centuries the tradition has increasingly changed, choosing the figure of the rabbit, smaller and more graceful creature, as a symbol of rebirth and sharing.

The rabbit as symbol of prosperity

Both rabbit and hare are very prolific animals, always associated with the theme of prosperity, strongly linked to the Easter festival. The hare, therefore, is a figure charged with symbolic meanings since ancient times: several Greek philosophers had questioned its sexuality, convinced that it was a hermaphrodite animal, but above all able to reproduce without sexual intercourse. In medieval times, the theses carried out by Plutarch, Pliny the Elder, Filostrato and Claudius Eliano were interpreted as a reference to the Virgin Mary. In various paintings of ecclesiastical art of that period, in fact, the hare is depicted next to Mary and Child, as a metaphor of fertility and at the same time purity of the flesh.

Chocolate aside, the absolute protagonist of the Easter breakfast is the osterfladen, also called Gâteau de Pâques (Easter cake), an ancient specialty born in Basel, originally created to be blessed by the priest during Sunday mass. According to food historians, the first traces of this cake can be found as early as the year 962 AD, although the first written evidence dates back to the 16th century. In the volume Ein köstlich new Kochbuch by Anna Wecker, published in 1598, a cake similar to the current osterfladen is described as a shell of brisé pastry stuffed with semolina or rice cooked in milk.

In the past, Parmigiano was often added to the dough, while towards the end of the 18th century one of the most popular fillings was stale bread soaked in milk or water, and flavoured with wine and rose water. Today there are many variants available in the various cities of Switzerland, studded with raisins, candied fruit or chocolate chips, even if the more classic versions remains with semolina or rice.

Then there is the zopf, or züpfe, a typical bread also common in Austria and Bavaria, made with flour, milk, eggs, butter and yeast. A soft and golden leavened braid that’s a must on the Easter table. Baking has always been very developed in Switzerland, with a nod to French and German traditions, two points of reference for bread making worldwide. There are almost 200 types of bread present in the country, and there is no meal, from breakfast to dinner, which does not include a good slice of bread as an accompaniment.

Despite being born on the occasion of Easter, today zopf is also consumed on other occasions, usually on Sunday morning. Very tied to the Emmental-Oberaargau region, the bread was born around the middle of the 15th century, and it immediately spread to all other areas. The origins of the recipe are not certain, but the most popular legend has it that the shape of this leavened cake derives from the ancient custom that widows had of cutting their braided hair and burying it together with their husbands. Today there are many ways in which it’s consumed, both sweet and savoury: cheese, salami, butter and jam, even peanut butter: every ingredient is allowed as long as the bread is fresh and of excellent quality, even better if homemade.

Italian Easter traditions at the table

Easter in Poland: babka, mazurek and the Easter basket

Riviera by Elio. Mediterranean cuisine in the heart of Switzerland