From creams to fruit sorbets, by way of novel savoury flavours: whatever the choice, gelato is always a good idea at every hour. Here are the best in Rome.

Third edition of the Gelaterie d’Italia guide is a manual that gathers locations dedicated to the art of gelato. 350 addresses scattered all over the country, 43 of which awarded with the Tre Coni (maximum recognition): an ever growing sector, with master craftsmen who operate meticulous selection of ingredients, transforming them with taste and inspiration.

The best gelaterias in Rome

In showcasing the best Italian gelato, we’re starting our exploration from Rome, a city that offers wide choice for those in search of an excellent cone or cup. Here, the 10 best gelaterias in town (and surroundings), awarded with Due Coni and Tre Coni recognition.

In Civitavecchia, Ermanno Di Pomponio is number one in his field: from ingredient selection to flavor combos, nothing is left to chance. As the name implies, this is gelato is made with noble ingredients: no additives or refined sugars, only organic and biodynamic products, which compose enveloping and sincere flavours. Try the classics, made with milk from Upper Bavaria, and seasonal options, such as organic chestnuts and Grand Cru vanilla. A new opening is expected in Rome (construction is yet to begin), and for this reason the shop will be closed every Monday and Tuesday throughout the summer season.

Healthy and natural products, made with prime quality ingredients, chosen by gelato master Dario Rossi himself, who every day commits to offering exceptional gelato in his native town of Frascati, featuring niche productions and telling the story of the farmers that grow them. Among signature flavours are Latte erba, made with milk obtained from grass- and cold-pressed sunflower oil-fed cows grazing at Salvaderi farm. The food offering is equally excellent, “Gambero Rosso” in the first place, a dish of ricotta, zucchini blossoms and anchovies. Another must is “Butter and jam”, while lovers of classic flavours will find solace in the house zabaione or Tuscia hazelnut. Furthermore, there’s a hat tip to the territory with the Frascati Superiore wine flavour.

A long-standing reference point in the city: Alberto Manassei‘s gelateria was among the first to offer a natural, healthy product without pre-gel bases and additioves. Among favourite flavours we loves those made with nuts deserve most attention, exquisite in all variations, from pistachio to almond (rich and justly popular), but chocolate flavours (dark, milk, orange, whole with cacao beans and coconut sugar) are equally tantalizing. And then there are the sorbets, made with mandarin and quince, plus pastry cream and stracciatella. Gelato lollies covered with fondant or white chocolate are also a specialty. In addition to the flagship store, there are also branches on Via Pantaleo, Viale Regina Margherita and on Via di Ripetta.

Recently opened Bistrò di Gelato di Geppy Sferra is located within the Tor de Schiavi headquarters, where the spopular gelato maker works in the Centocelle district. A real tasting space where gelato lovers can taste seasonal dishes paired with excellent homemade gelato. However, the location in the Colli Aniene area is also great, here you can try original flavours made with high quality ingredients, such as milk, cream, fresh fruit and nuts. Sorrento walnuts, pinenuts from Sicily, or the pistachio from Bronte, zabaione made with Passito di Pantelleria, plus all the seasonal fruit variations (when available, please consider the Moricone jujube).

At Mannari, quality and taste have always been one and the same. The solid business assisted by Giuseppe Bastianelli, passionate and attentive gelato maker, creates balanced and tasty flavours with lots of imagination. Quality ingredients and care in processing guarantee excellent quality gelato, starting with the many chocolate variations. Creams use Salvaderi milk as their base, which make delights such as stracciatella, pistachio or zabaione even more creamy and inviting. Don’t forego the fruit sorbets or the frozen desserts and ice cream cakes, which are the house specialty.

One of the very first quality gelaterias in Rome, San Crispino has staked everything on fresh, seasonal ingredients, few well-executed select flavours. Fruit sorbets stand out for their intense and enveloping flavour: citrus fruits, strawberry, melon, apple, pear and many others that change according to season. Among the creams, Marsala custard, and the signature San Crispino flavours stand out, both delicate and fragrant with honey, followed by stracciatella and meringue. Note of merit for the pastry cream, which is ethereal and very fresh.

It opened quietly in 2010, in a secluded street just a few steps from Janiculum Hill, in the heart of Monteverde Vecchio, but soon it became known throughout the neighborhood and beyond. After a past as a pastry chef for big hotels, Dario Benelli converted to the art of gelato making, maintaining his philosophy: scrupulous ingredient selection, reinterpretation of ancient recipes and great aesthetic sense. In addition to the house classics –– lemon basil, wild fennel cream and sour cherries, Roman mint and lemon zest––it’s the constantly changing innovations that attract hungry customers every day in search of a different gelato tasting. Here options change constantly: linden tree honey with orange and almonds; coconut and myrtle berry; salt-encrusted almonds. At the base of everything is goat milk from a small Sabina farm, and then all sorts of niche ingredients waiting to be discovered.

Every flavour at Otaleg is the result of careful and well-defined work at every stage. The gelato here is capable of lending emotions every time: Marco Radicioni never ceases to amaze and continues to prove himself as one of the best gelato makers in Italy. Despite the many changes (the closure of the flagship HQ in viale dei Colli Portuenis and the opening in Trastevere), the maestro doesn’t miss a beat. Think persimmon––excellent in both taste as in texture––creams (the raw milk fiordilatte is a true delight), plus the many imaginative creations. Every one of his ideas deserves to be tasted. Musts inlcude Iranian pistachio; apple with almond, raisins and cinnamon, and then the savoury variants such as brie with toasted sesame and acacia honey.

Quality raw ingredients and technique: not much else is needed to make a good product. This has always been the belief of Claudio Torcè, expert gelato maker whose first steps date back to 2003, evolving and improving over time, thanks to a success destined to last over time. Since last year, his attention has focused on health: he uses only milk and cream with high digestibility, and fructose, for an even richer and more satisfying gelato. Lemon, mandarin, but above all many variations of chocolate, Claudio’s strong point, who juggles 18 different proposals at a time. And then zabaione, hazelnut and his personal interpretation of Nutella, made with hazelnut, chocolate and cacao. For a total of over 90 sweet flavours, plus a whole compartment dedicated to savoury gelato flavours.

An gelato that comes from the mountains and arrives straight to Rome: the protagonist at the base of every preparation is Plose water from South Tyrol, but Günther Rohregger has gone beyond his native land, searching for quality almost everywhere, from the Padana plain (from which he buys his milk) to Sicily (for prickly pears). Thus was born the beautiful selection of seasonal flavours: there are wild blackberry, fig or persimmon sorbets, and then many delicious creams like hazelnut from the Langhe, or vanilla. The pastry cream flavour is also excellent and the wafer cones are delicious. For gelato lovers with a sweet tooth, there is also the possibility of buying homemade gelato cakes and desserts, here or in the other two locations in Piazza Sant’Eustachio and Via dei Due Macelli. 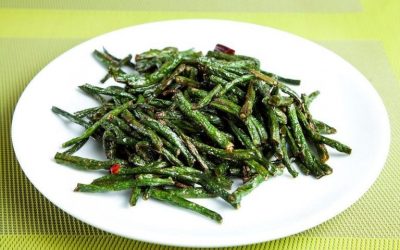 From Asia Inn to Sinosteria: the story of Jun Ge, a Chinese restau...

The best gelaterias in Rome according to our Gelaterie d’Ita... 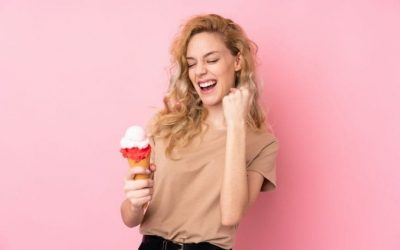 Anti-aging gelato made with hydrolysed collagen 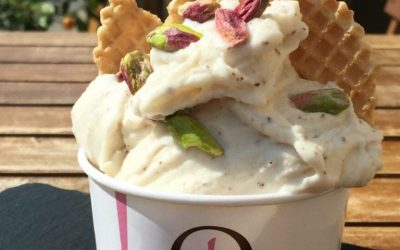 The best gelaterias in Turin in 2020 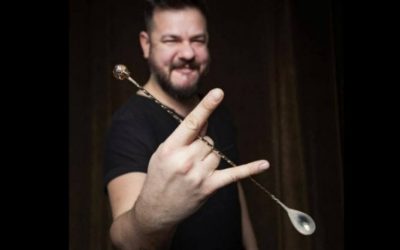 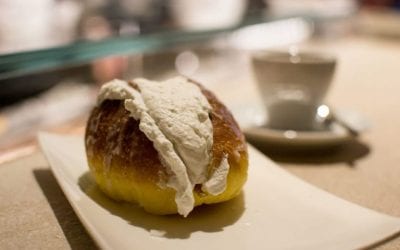