The best international street food in Milan: 6 places to try

One of the Italian cities where international cuisine is most rooted, in Milan there is plenty of choice for lovers of exotic flavours. Here are the must-taste foreign street foods.

Via Paolo Sarpi in Milan––and the network of streets that surround it––constitute the most important, surprising and industrious Chinatown in Italy. But it’s not Chinese specialties alone that make up the tissue of Milan’s international food scene.

From kebabs to empanadas, to steamed dumplings, Milan has a lot to offer in terms of foreign cuisine. Here are the best places for a gourmet break according to the Street Food d’Italia 2019 guide.

A baked water and flour dumpling containing meat and spicy vegetables, according to Argentine tradition. We’re talking empanadas from Buenos Aires, which in the Porta Ticinese local are prepared with beef, onions, potatoes, olives, aji molido, cumin, tomato and chimichurri. There are also great desserts, such as dulce de batata and then bottles of wine from South America, matched by friendly and attentive service.

A sort of unconventional kebab joint, where diners can find puccia salentina and piadinas, stuffed with veal, chicken or vegetables, provided they be Italian. The meat is cooked on the classic spit and the ingredients can be combined with each other to taste, even if already assembled combos exist, such as piadina with dried tomato, burrata and arugula. Craft beers and fries complete the picture.

In the beginning it was Mao Hunan, a restaurant focused on Hunan cuisine, then came Maoji Street Food, with popular recipes and table service, and finally Mini Maoji, in self-service version with a more informal atmosphere. The bao are the main attraction, steamed buns stuffed with the most varied ingredients (try the braised tripe), but there are also dumplings; prawns with basil wrapped in Kataifi pastry, plus skewers. It’s also worthwhile to make a stop at the Mood Market, a well-stocked Asian emporium where gourmands can buy all the ingredients to try their hand at home.

A small place that offers a delicious cusine that mixes the Middle East and Italy, and which produces quality kebabs filled with local ingredients. You can choose between different types of bread, stuffed with chicken or in the vegan version, with falafel or fried eggplant. And then lots of rich seasonings, sauces and salads.

Agi’s dumplings don’t need much of an introduction: they are now among the best in town, thanks to the synergy created with Walter Sirtori’s historic butcher, a neighbor and supplier of prime quality Italian meats that go in the fillings. Then there are the typical Peking crepes, rolled and stuffed.

Second venue within walking distance of the flagship, with a smaller but well-researched menu, focused on other Canton street specialties. The protagonists are baozi, steamed buns filled with meat, ginger and vegetables; and then the run-bing, spring rolls in the more traditional version, that is not fried. The spaces are small and the preparation is express, designed only for take-out. If on the other hand you prefer enoying Agi’s dishes comfortably seated, there is the trattoria Nove Scodelle in the Loreto area.

The top 4 best bacari in Venice 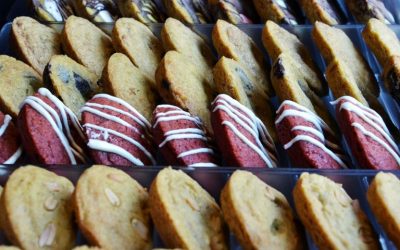