The idea of panettone spread hails from Ferrara, the historic chocolate factory Rizzati

What if panettone could be eaten with a spoon and its scent lasted all year? A chocolate artisan in Ferrara has created a spreadable cream with all the ingredients of the Christmas cake, which can be enjoyed out of season as well.

“I have always been a lover of panettone and chocolate even outside the canonical Christmas period, and I’ve always nursed the idea of eating it, in various forms, year round.” The words spoke are of Marco Matteucci who, together with his brother, is the owner of a historic brand of artisan chocolate from Ferrara, Rizzati. He is about to market the first spreadable panettone cream. The company, which boasts a long tradition of citrus fruit candies and the transformation of chocolate into pralines and Tenerina cake (a typical local dessert), wanted to shake up the tradition by putting on the market a new, completely craft product that has tradition in its identity, but in a completely revised gastronomic guise. “We started working on it at the end of last year, also looking at the American market where spreads are many and with unusual flavours – says Matteucci – and so we had the idea of creating a flavour of our own that grows with us from an early age, and that is easily recognizable. Panettone seemed like the obvious choice.

Panettone spread for all seasons

In the Ferrara laboratory the Matteucci brothers began to test, they added and removed elements, tasted, calibrated, mixed and tasted over again. “The tests and tastings lasted for months, we allowed the product to be enjoyed by many people, and only when the surprise on their faces turned into a smile did we realize that we had done a good job”. The spreadable cream, completely organic and gluten-free, has a base of cocoa butter, cane sugar and skimmed milk and is enriched for 20% with sultanas and pieces of Calabrese orange previously candied in the very same laboratory. The 200-gram jar contains all the elements and aromas of a traditional panettone but under a new guise, making it a “seasonally adjusted” product. In the factory on the outskirts of the city, where five people work, they are ready for production. Once fully up and running, it should release about five hundred kilograms of cream a day which translates to thousands of jars. “We already make traditional spreads, such as gianduia, pistachio or classic cocoa, but this with the scent of panettone is a real challenge, especially at this time of year”.

Matteucci doesn’t stop here, so along side this new product is also the release of another cream, Pampapato (chocolate cake of the Ferrara tradition enriched with cinnamon and cloves) as well as a Tenerina spread (soft chocolate cake) enriched in this case with pieces of the same cake that they produce by the thousands every day. All recognizable flavours, which with a change of texture take on a completely new look. “The production will not be high – explains Matteucci – and will be available in our stores in Ferrara, Cortina and Ravenna (from December) and at Eataly, also in the U.S., because locals really like the Italian cake, as panettone is called overseas, very much”.

Vin brulé in the world: history, versions and recipe of the hot Ch... 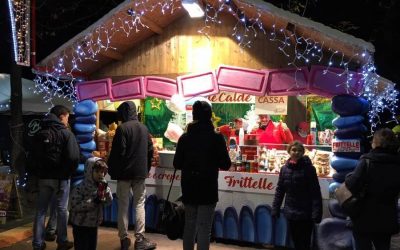 Christmas in Milan: 6 markets for eating well in Milan during the ...

Torrone, how to make it at home for Christmas