Guide to eating well in the Cyclades Islands. Santorini, Mykonos and Paros 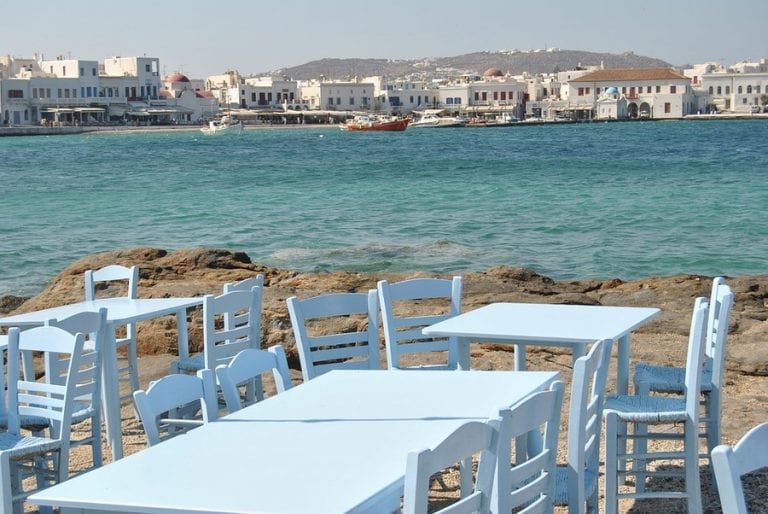 Often overlooked in favor of nightlife and the beauty of local beaches, the gastronomic tradition of the Greek islands actually hides a mix of flavours, aromas and fascinating tastes. The specialties of the Aegean Sea and the Cyclades.

That the Greeks are food lovers in supported by the national proverb “the second portion is also good”. Although many define it as poor, the local cuisine draws instead from its simplicity and seasonality, as well as the legacy of Ottoman influences. A table that boasts a series of tasty dishes such as tzatziki sauce, consisting of yogurt, garlic, dill and cucumber, eaten with pita, or even dolma, vine leaf rolls stuffed with rice and spices.

For years, among the most popular summer destinations, the Aegean islands, framed on the water, have been flag bearers of the Mediterranean diet, locally considered a sort of nutrition gospel. And the islands continue to attract tourists from everywhere for their landscapes and the increasingly active nightlife. Merit for this goes to the many fruits of a generous land, first of all olive oil, but also grains, vegetables and herbs, precious raw materials that Greece has in common with Italy, hence these islands actually have a lot to offer in terms of dining. Among local recipes, in addition to the ubiquitous moussaka and the famous baklava, there are some other particular dishes, built around local specialties. 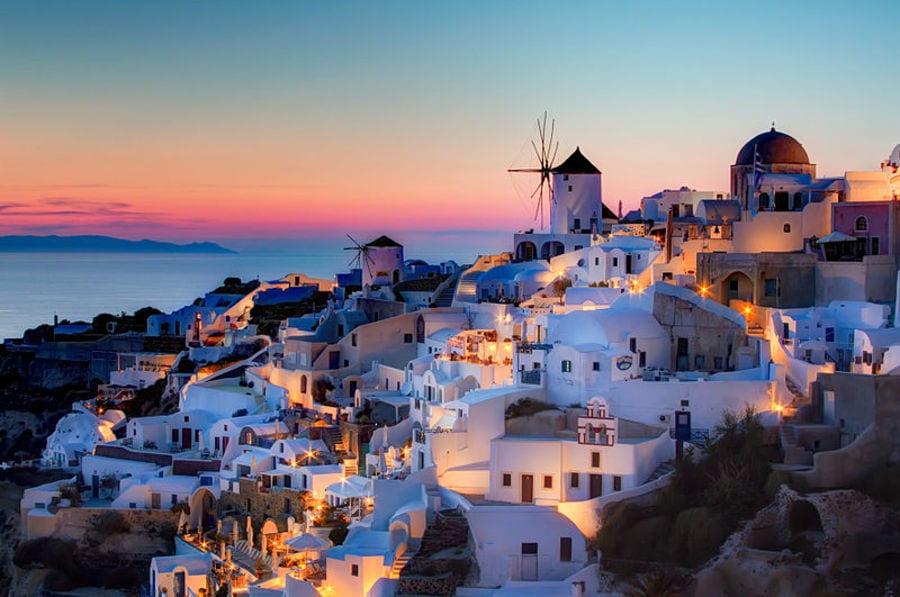 Santorini: wine in a volcanic territory

Starting from Santorini, one of the largest islands emerged in prehistoric times. Here, on the routes of the Hellenic ships, traveled the cuttings of most of the vines cultivated today in Europe (not by chance, these places have passed into history as the center of vine spreading throughout the Mediterranean). Here are the main grape varieties:

In the past used primarily for the production of the famous Vinsanto, among the most characteristic local wines, semi-sweet, rich on the palate and with rounded note.

The most famous of the white grape varieties, which from the island of Santorini was then planted also in mainland Greece, especially Macedonia and Peloponnese. Resistant to aridity and mildew, assirtiko gives life to full-bodied and fresh wines, with good acidity, light aromas and persistent citrus scents.

Also shared with Crete and Rhodes, this is a white berry variety present in several Aegean islands. It is generally used in blends to produce the Santorini Dop.

The most interesting, even if it covers only 2% of the island’s viticulture area. This is a variety that has risked extinction because of its very low yields. The bunches often ripen at different times, resulting in laborious harvests and micro-vinifications. In the past it was cultivated only by small wine producers for passito; today it’s vinified in red and produces wines that are proving to be very interesting.

Grape variety present in Santorini, Crete, Rhodes, Paros, in some areas of Attica, Thessaly, Evia and Macedonia. It produces red wines of character, with robust tannins, which require a long refinement to smooth the young roughness around the edges and find the right harmony. 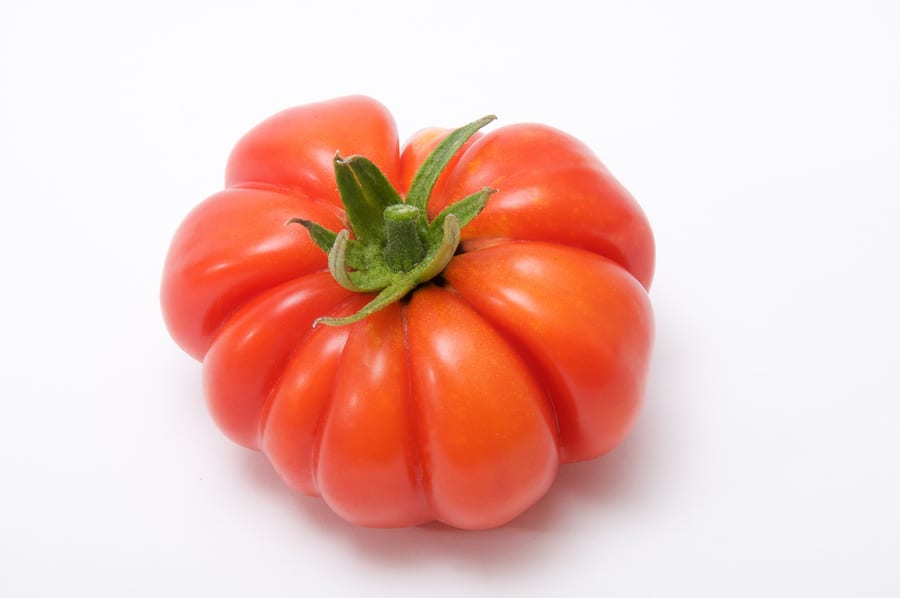 The typical tomato of Santorini is a rather sweet variety from Egypt that found in the island’s rich soil the perfect arid environment to take root and develop. According to legend, the tomato, small or ribbed, was imported by the captains of ships. Whatever its origins, in a short time it became the absolute protagonist of the local diet. To the point of having its own museum, the Industrial Tomato Museum, located not far from Vlychada beach, showcasing ancient machinery, manuscripts and old jars.

Above all, over the years tomato has given rise to one of the most popular recipes, the domato keftedes, tomato fritters made of red onion, fresh mint, salt, pepper, olive oil, oregano and of course tomatoes from Santorini.

Keftedes (literally, “spiced croquettes”) are so common on island tables that they’re made with the most varied ingredients, meat, fish, vegetables. Among the best known, in addition to those made with tomato, kolokytho keftedes are made with zucchini, eggs, feta, onion, parsley, mint, salt, pepper, breadcrumbs and the inevitable drop of extra virgin olive oil. The rest is left to imagination, which for meatballs is almost endless, provided they be well seasoned with herbs and spices and served hot, according to tradition. 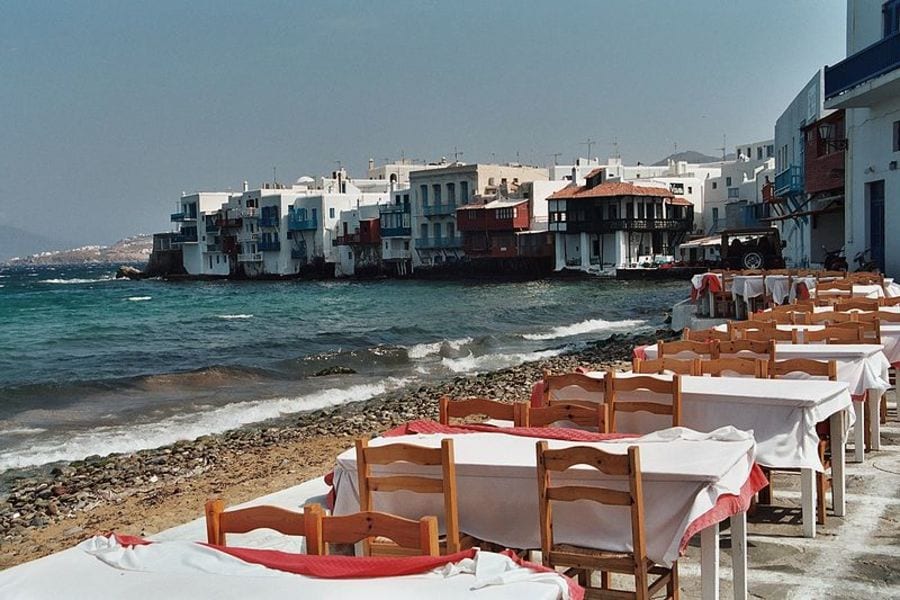 Mykonos, beyond the nightlife

When one thinks of Mykonos, the first image that comes to mind to those who know the island only from movies, is that of a place – especially in the last decade – relying mostly on tourism, a destination for vacationers looking for untouched landscapes, and lately, an unmissable stop for young (and not so young) attracted by great DJs and avant-garde clubs. It’s sometimes difficult to remember that this is in fact a special territory that, between breathtaking stretches of coast and trendy bars, still preserves the oldest craft traditions, taverns of the past, enchanting views and a maze of narrow alleys overlooked by historic buildings.

Salty and rather aromatic PDO cheese that boasts an ancient history. The name derives from the term κοπανάω, meaning “vigorously beaten”, and refers to the technique of preparation that, in fact, has the milk – cow, sheep, goat or all three combined – constantly stirred by hand by the cheese maker. Its spicy and slightly pungent flavour derives from the by-products of the micro-organisms used in the processing. Also produced in Tinos, Andros, Syros and Naxos, the cheese is appreciated above all for the taste of the Cycladic milk, that’s very aromatic due to the many wild herbs of the territory where the animals feed, especially in spring. Made for over 300 years, the kopanisti can be preserved for a long time: it was born, in fact, for the navigators of the island, who had to face long sea voyages. In the past, thanks to its value and its strong bond with the locals, it became one of the main gifts of mothers to future brides. 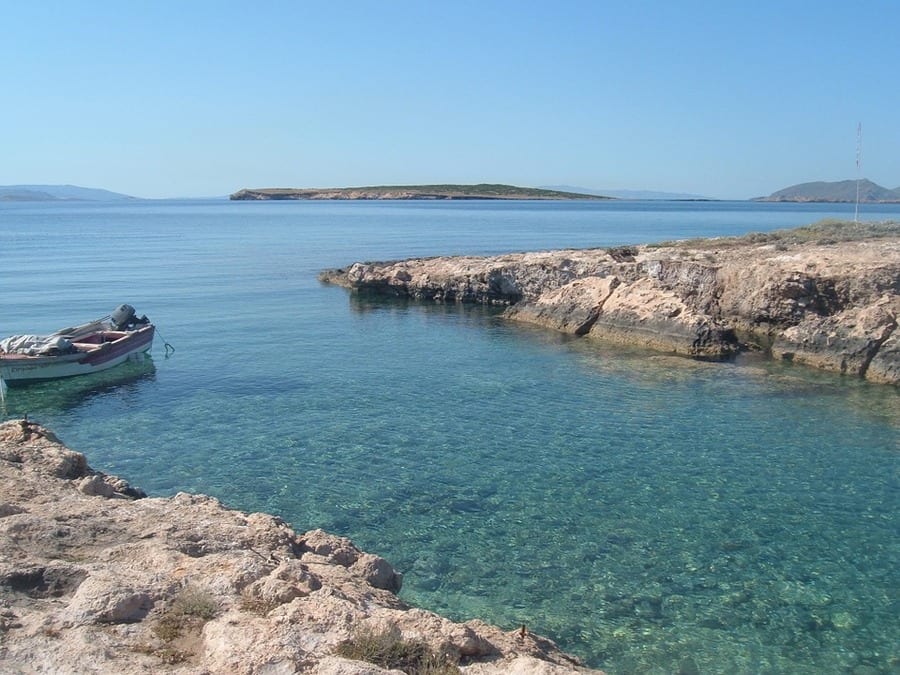 Paros, fresh seafood from the port of Naoussa

Still in the Cyclades, in the center of the archipelago, another postcard island: Paros, surrounded by protected area of a marine natural park, crystal waters and set among lush pine forests and the most intense green of the Mediterranean scrub. In the little restaurants lined up in the small port of Naoussa, there’s always fresh fish, caught daily by the fishermen of the area who patiently wait for the gifts of the sea. King of the Aegean Sea is octopus, often left to dry on the wires in the sun, to be enjoyed in restaurant preparations, or grilled and sold in street-side kiosks and local vendors. 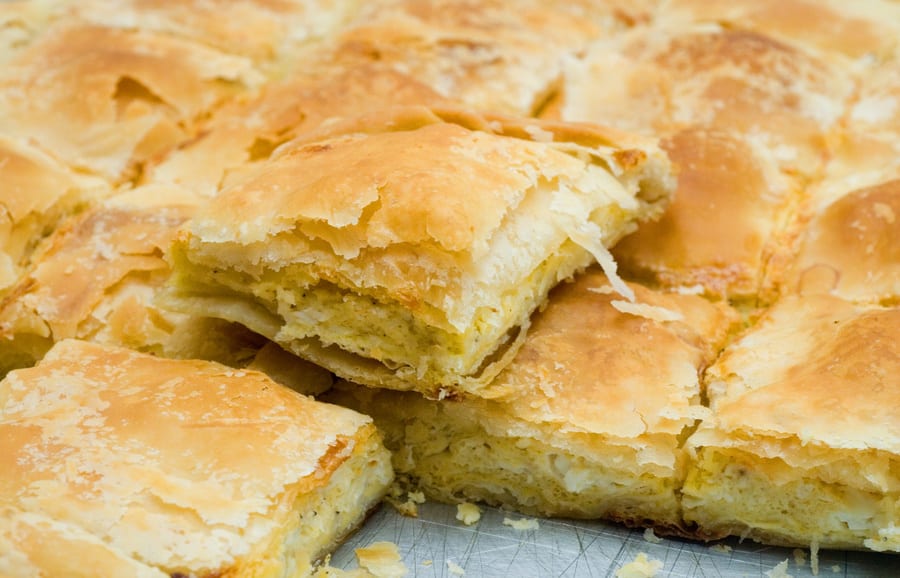 Widespread throughout the country, tiropita has found a special home on the island of Paros, where it is much appreciated and prepared both at home and in restaurants. It is a pie of filo pastry stuffed with feta, eggs and various spices, spread with butter and olive oil and browned in a pan. Lesser known “cousin” of spanakopita––a savoury pie stuffed with spinach, feta, onions and eggs––the tiropita is often served as an appetizer, accompanied by typical Greek salad or tzatziki sauce, but it can also be presented in a sweet version, with the addition of honey. In any case, at the base of this recipe are two main ingredients: 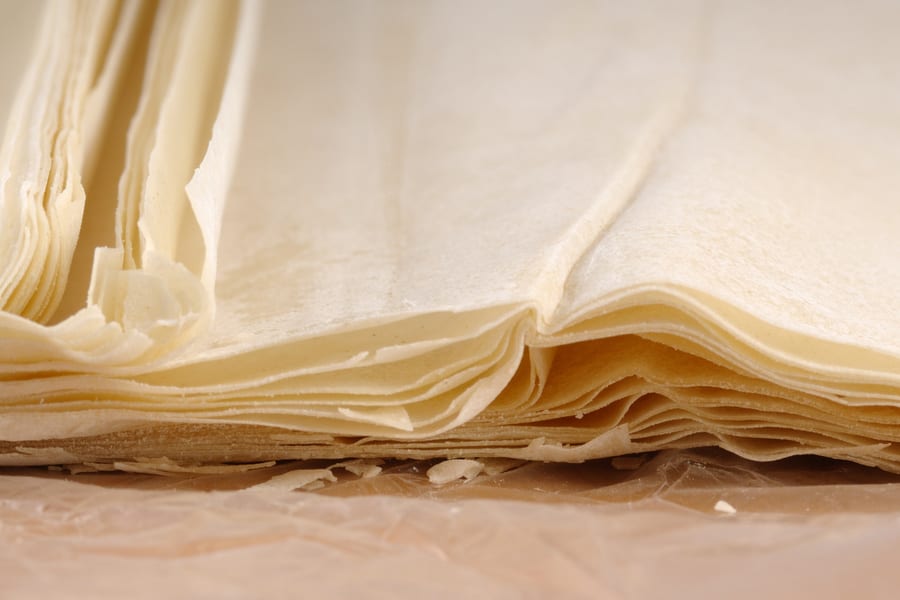 A thin sheet, stretched to the limit, almost transparent, and layered (very difficult to achieve if you do not have excellent manual skills and familiarity with the dough). A primordial and thicker version appears to hail from Central Asia, where it began to spread already in the 11th century. There are traces of it in the “Lughat Diwan al-Turk”, a Turkish dialect dictionary by Mahmud Kashgari, which describes the yuvgha (from yufkla, “thin”), a type of curled and crispy bread. Phyllo has undergone several changes over the centuries, up to the current paper-thin form, most likely born in the kitchens of the Topkapi Palace, once the residence of the Ottoman sultan.

Known primarily as the star of the famous Greek salad, this is a cheese that can actually be used in many preparations. Semi-hard feta is crumbly and with small irregular holes, intense flavour and pronounced taste. It is under PDO protection and is among the most consumed in Greece (we are talking annual 27.3 kilos of feta per capita). It’s been produced for centuries with raw sheep’s milk in purity or mixed with goat’s milk: the name comes from fetas, or “thin cut piece”, referring to the procedure of cutting the curds. 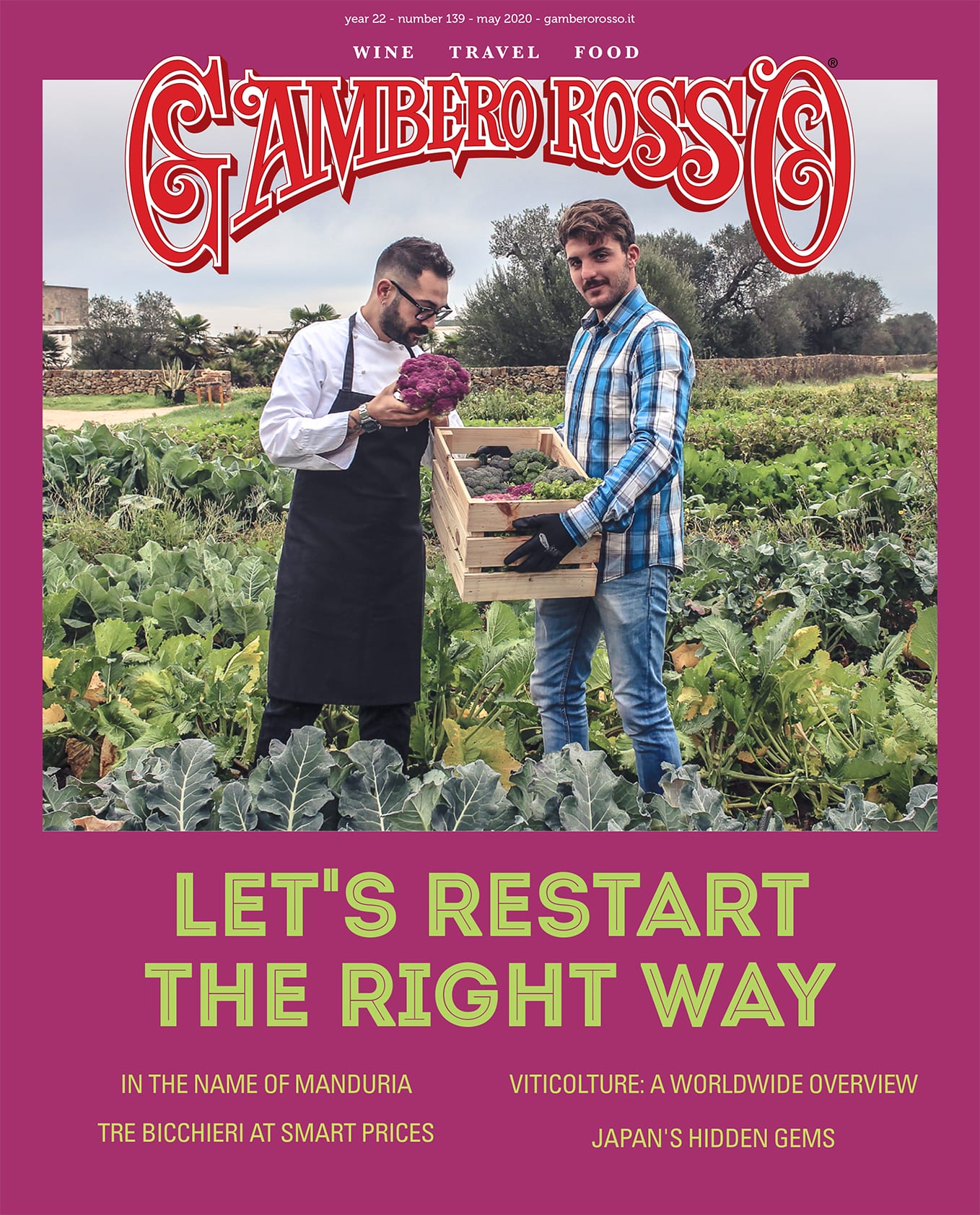 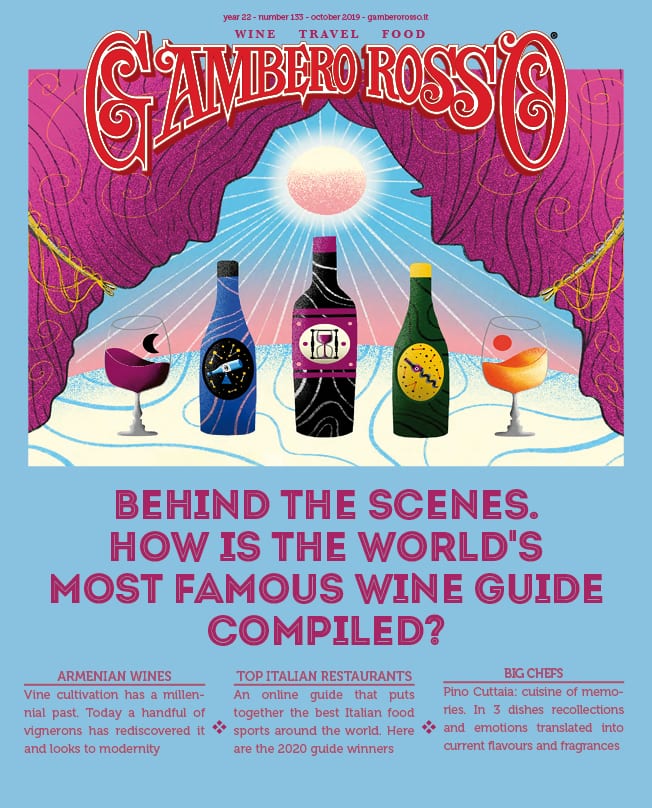 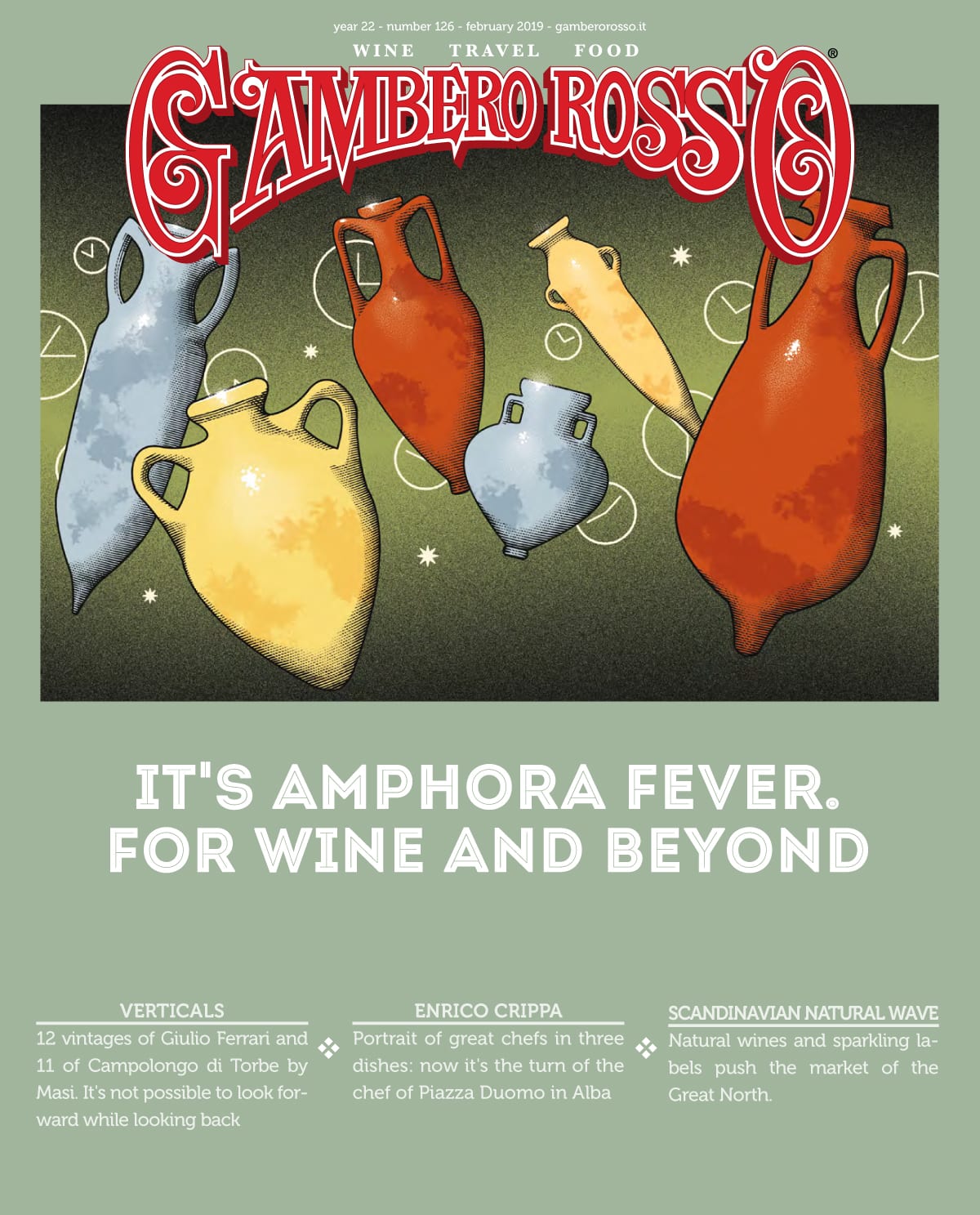 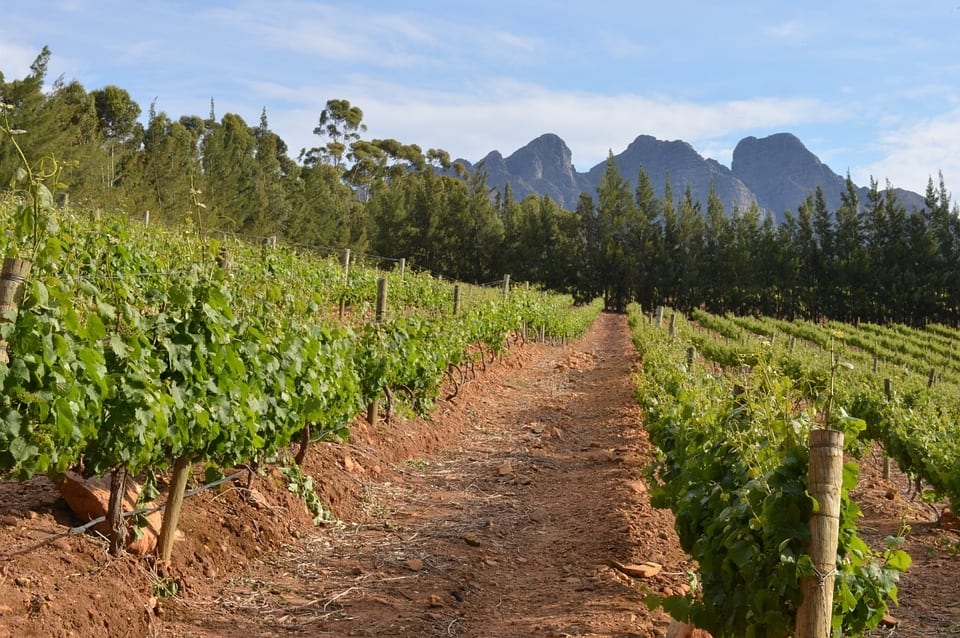 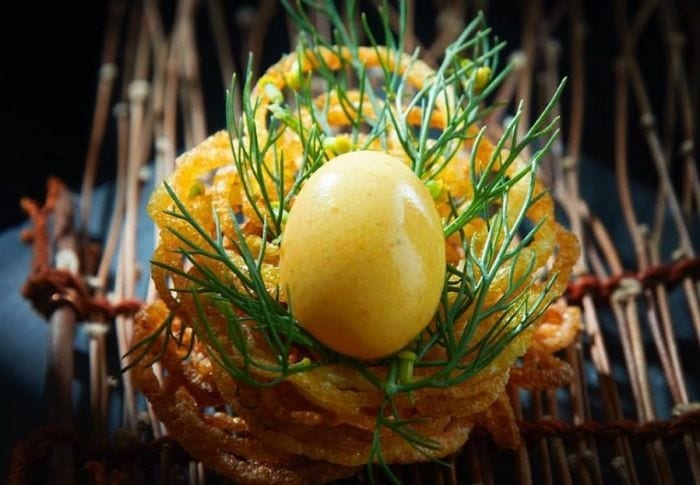