Al fresco dining in Rome 2018. All the new openings for the Eternal City summer 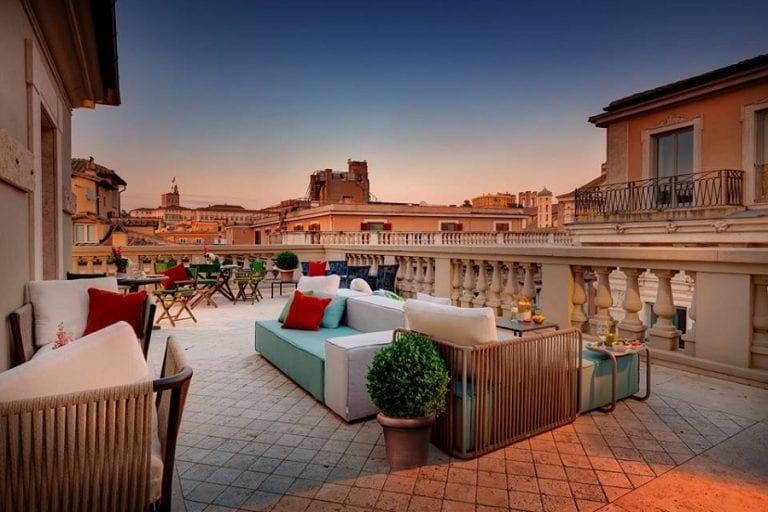 Romans love to live outdoors all year long, but summer is the perfect time to discover terraces and hidden courtyards. There are several new features for the summer season, including new hotels with breathtaking views of the city, patios and other fun projects

Panoramic terraces, gardens, patios hidden among courtyards and alleys of the city center are undoubtedly a must for the Roman summer. Due to its urban conformation and rather favorable climatic conditions, Rome invites you to enjoy venues for food and drink outdoors for most of the year, but it is during the warm summer evenings that the opportunity to enjoy a table under the stars becomes a necessity. The Roman dining scene boasts many new openings in the city, including recently opened hotels - or near the inauguration date - in the most central areas of Rome, many of which ready to offer all the charm of terrace dining and menus tailored to the needs of a varied clientele. Without forgetting summer festivals and events that open doors of villas and gardens otherwise closed to the public (refer to the suggestions for Roman Summer 2018). Following is our advice for some of the most interesting openings in recent months that offer alternatives to the traditional concept of dining al fresco. 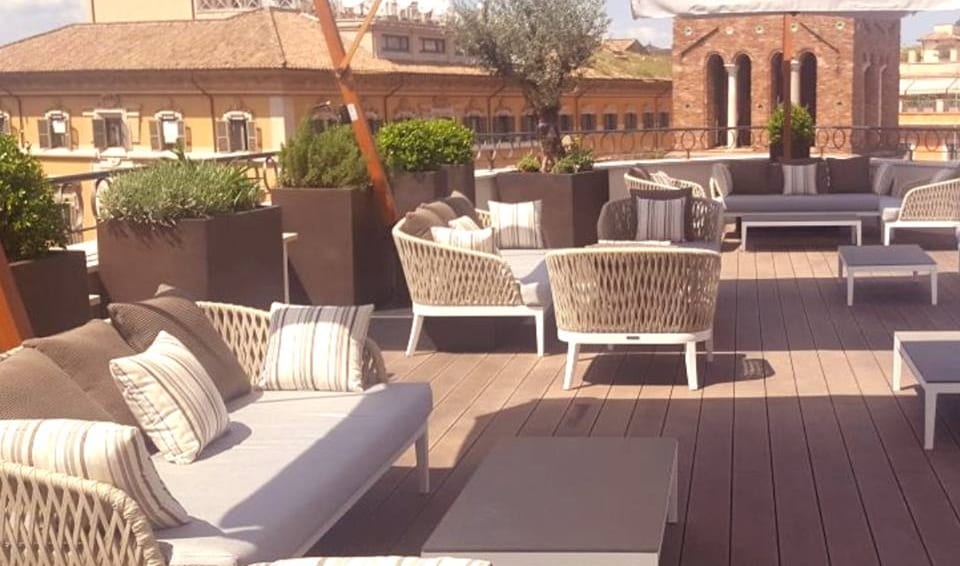 Divinity Terrace Lounge Bar at The Pantheon Iconic Hotel: The exclusive hotel of Autograph Collection group - 79 rooms, of which 20 are suites designed by Marco Piva - opened at a stone's throw from the Pantheon at the beginning of spring, and immediately focused on prime quality dining. First time working in Rome is chef Pasquale Palamaro, once executive chef at the helm of Indaco restaurant at Hotel Regina Isabella on Ischia. For his Eternal City challenge, he put together his kitchen brigade, designing the kitchen spaces and taking care of the menu at Dyonisus restaurant. The restaurant is located on the ground floor of the structure, under his supervision is also super-panoramic Dinivity lounge bar on the sixth floor of the hotel, with direct access to the rooftop overlooking the Pantheon, roofs and other domes of the city. Seating approximately 50, including tables and sofas, customers can sit for an aperitif, a quick lunch or an informal dinner. At the restaurant the menu on the other hand is à la carte, choosing among the chef's most famous creations, or a Mediterranean-inspired tasting menu.

Via di Santa Chiara, 4/a - thepantheonhotel.com 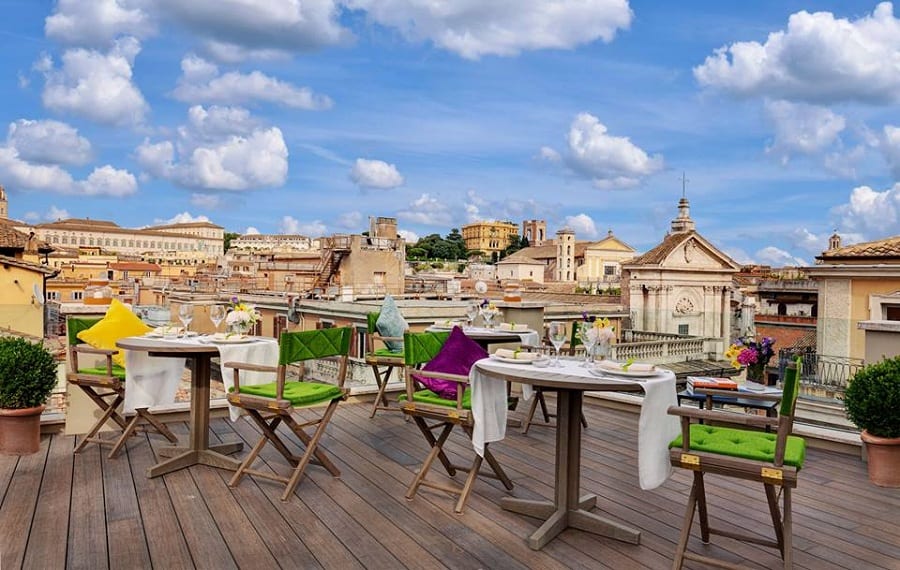 Singer Palace Hotel: Open to the public on July 2nd, the highlight is the position with a terrace overlooking breathtaking views of the Rome rooftops. The new hotel structure located in Via Specchi definitely deserves to be suggested as one of the best for the summer of 2018. Especially since it hosts the bar and restaurant overlooking the city center, including seating on sofas and garden tables. Open for lunch and dinner with a rather usual menu formula, such as Italian classic cuisine, raw and cooked seafood. What truly deserves here is the panoramic views. 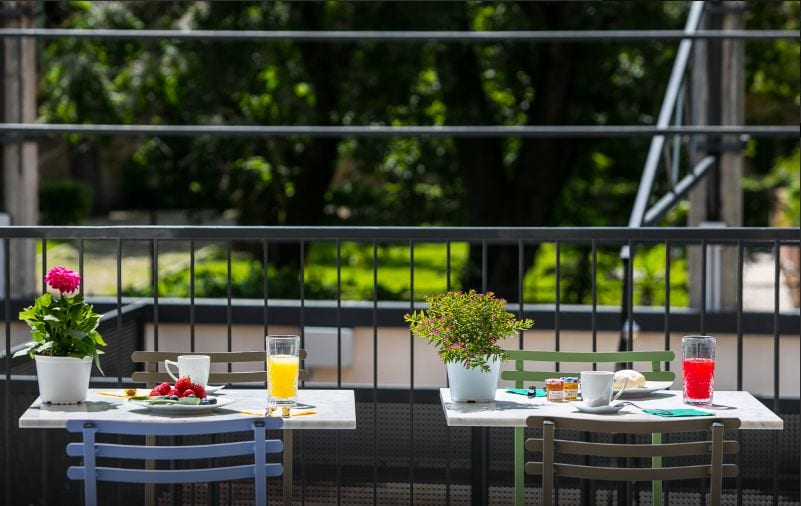 La Legnameria at Horti14: There is a new hotel, in the most secluded and residential part of Trastevere (near the Botanical Garden) that has made street art its hallmark. Merit for this was hiring Lucamaleonte to decorate rooms and common areas of the ex-carpenter studio by part of nufactory, a creative agency that developed the concept (the renovation project was curated by Stabili Architetti). In addition to murals on the theme of the Roman artist's landscapes, the jewel of the structure, also open to non-hotel residents, is the pleasant roof garden on the top floor of the hotel. This is a modern Italian-style garden equipped as an outdoor living room. Adjacent is the cocktail bar, renamed La Legnameria, serving hotel guests' breakfast, and in the evening becoming a cocktail and aperitivo hub, for relaxing under the stars. 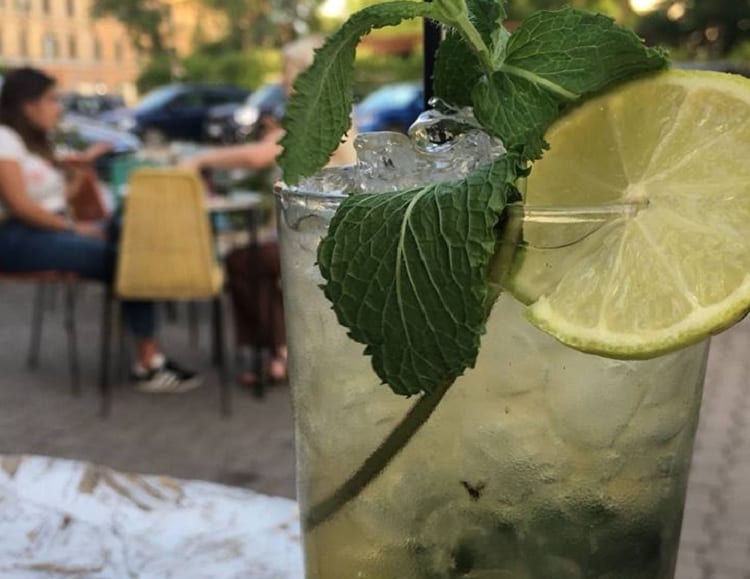 Mancio: With the recovery of abandoned city kiosks, Giulio Amorosetti and his partners have already proved thay have the stuff. Hence the repetition of the successful Tram Depot formula in a new area of the city. The kiosk, this time with a kitchen license, is the abandoned one located in Piazza Mancini, renovated in collaboration with II Municipio municipal body and open from June 26th. Initially only serving dinner, but in the following weeks business hours will be extended throughout the day, serving breakfast service (with specialty coffees and Lady Cafè and Piantagioni del Caffè roast blends) to lunch, aperitivo and dinner. 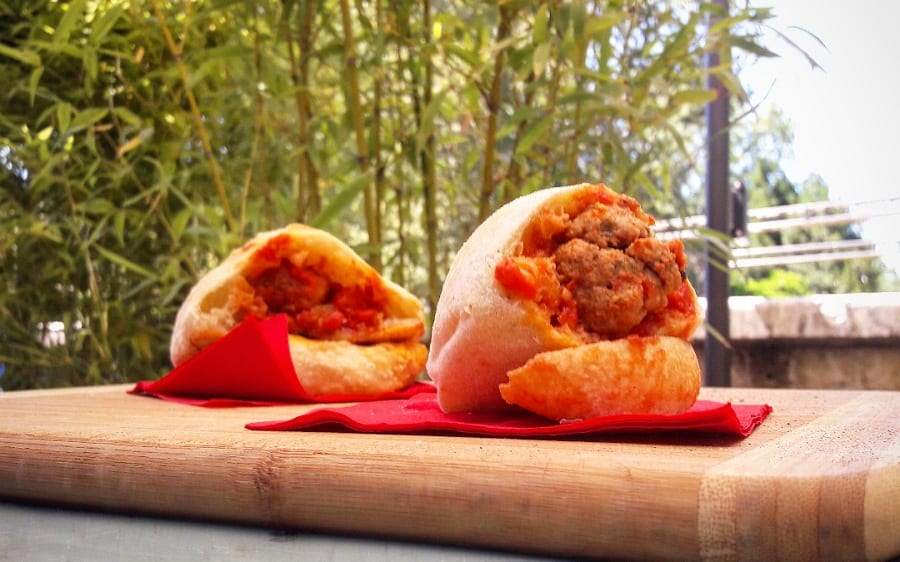 With a peculiarity: a working bakery in the kiosk, baking "saccocce di pane" with different cooked fillings. Furthermore, the effort is focused on reviving the square, organising events that involve other food businesses.

Stazione di Posta: New life (once again) for the former slaughterhouse bistro located within Città dell'Altra Economia. With the beginning of the summer, owner Pino Cau pulls out yet another rabbit from his hat, with a menu entrusted to young chef Luca Pistinizi and a decidedly affordable average price, in order to capture a wider range of customers (and eat as late as 2 am). This will definitely help the new outside seating on the square. 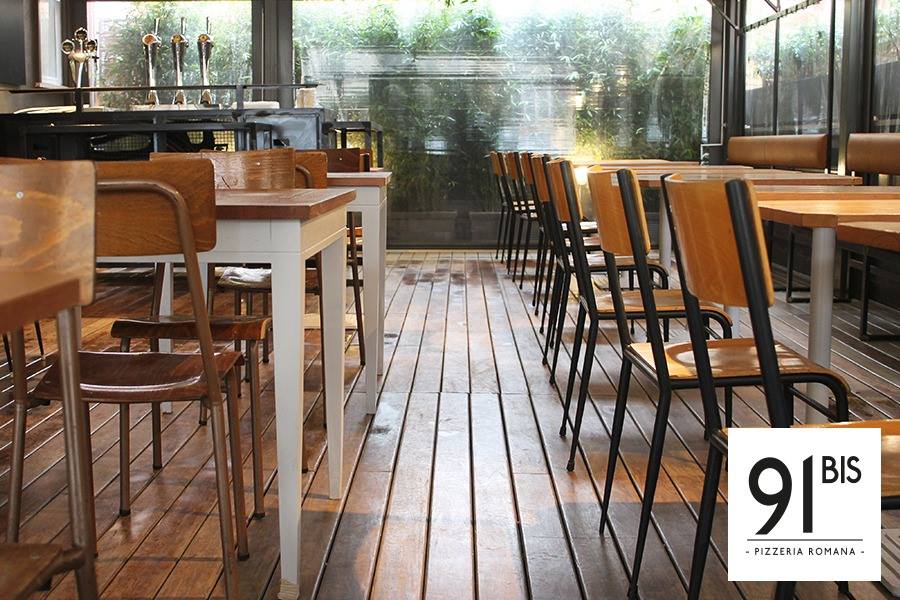 91 Bis Pizzeria Romana: It’s a lucky year for Roman pizza, which thanks to the talent of young pizza chefs willing to bet everything on the rediscovery of the genre, is now given new life, on the strength of ad hoc doughs and high-quality ingredients topping thin and crisp pies. The Roman pizza Renaissance started with the founders 180 grammi in the Centocelle district, now with 91 Bis we're on the other side of the city, a few meters from Ponte Milvio. In the location once occupied by ProLoco Farnesina, now there's a pizzeria managed by Mauro Meddi. White tiles on the walls, wood-burning oven, tables and chairs reminiscent of old school desks. But above all the large outdoor veranda (in use all year) with a beer on tap counter at the far end. Young staff and menu that ranges from classic Roman pizzas to more original proposals, such as "Profumo Amalfitano", with fior di latte, sauteed escarole, ricotta with lemon, and a vaporised emulsion of anchovies and limoncello. Even among appetizers, interesting variations include potato croquettes made with guanciale and red wine reduction on grana fondue, and bruschetta with cuttlefish ink and ricotta flavoured with cucunci, anchovies and almond flakes. 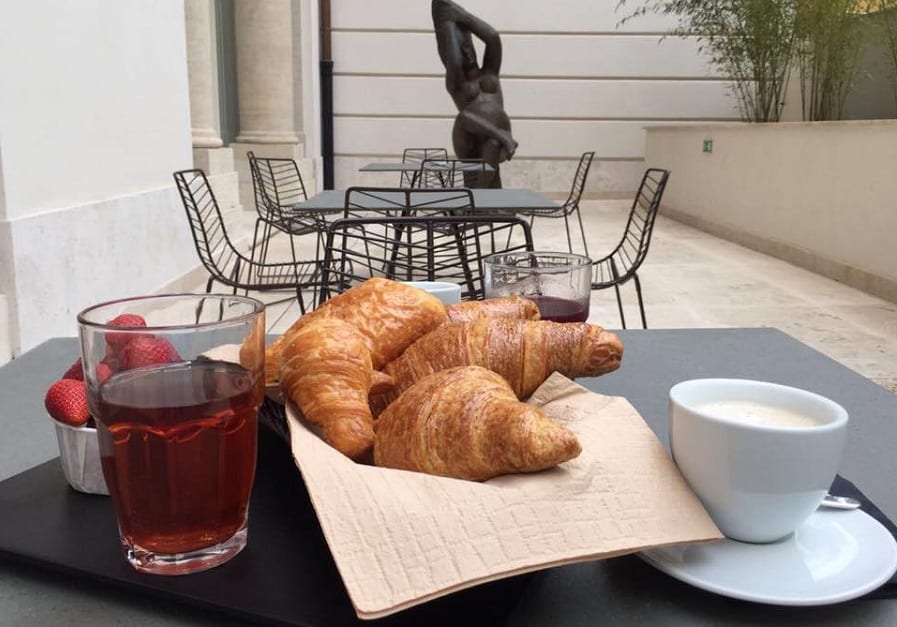 Palazzo Merulana: From the beginning of May, in the Esquilino district, Fondazione Elena and Claudio Cerasi restored historic Palazzo Merulana, a building of the late Twenties that had been forgotten for over twenty years. Today the Palace houses the Foundation's contemporary art collection, offering visitors an exhibition that includes Donghi, De Chirico, Balla and Capogrossi. But within the new cultural center, a there's also a food corner that adds to the quality of the local Rome scene: Cristalli di Zucchero, Santi Sebastiano and Valentino, Dol, Bottega Liberati, Meraviglie in Pasta. For breakfast, lunch, snack or aperitivo, comfortably seated in the tranquility of the bistro's terrace. 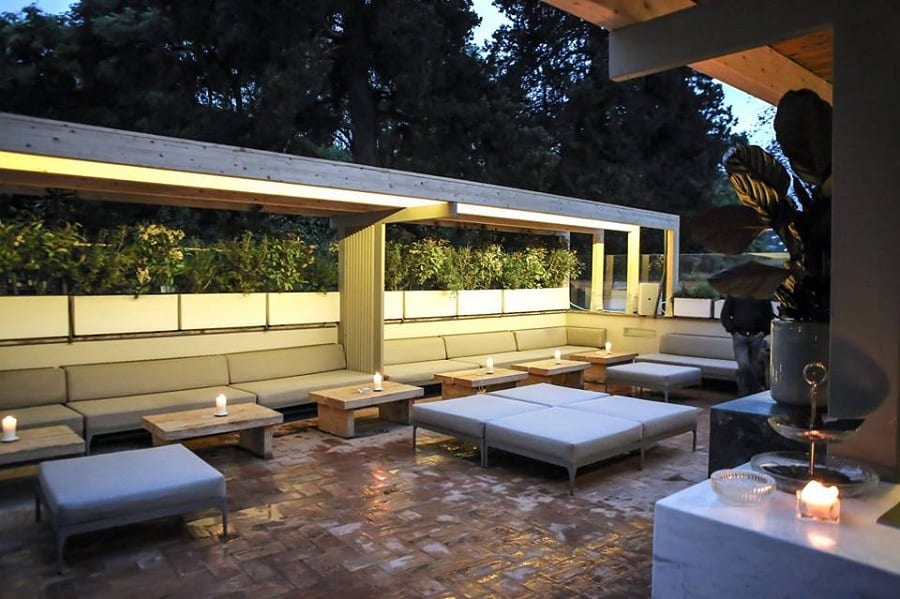 Terrazza Parrasio: As always, Terrace Parrasio (formerly known as Terrazza San Pancrazio) opened the summer season with a few weeks in advance, at the beginning of June. At the foot of the Janiculum Hill, minutes away from the Trastevere nightlife, but in a green oasis which provides respite and tranquility – the cocktail bar is in the hands of bartender Riccardo Speranza, while the food offer, mainly raw fish and sushi, is entrusted to Massimo Riccioli. Music and drinks pairings to boot.

Eggs: A move that looks more like a promotion for the format offering many ways of cooking eggs, including a carbonara menu, omelettes and creative dishes designed by chef Barbara Agosti. And in the change from the intimate space of vicolo del Cedro to the new restaurant in Via Natale del Grande (also in Trastevere) Eggs has not only gained many more seats and airy atmospheres, but also a comfortable street patio a few steps from Piazza San Cosimato. 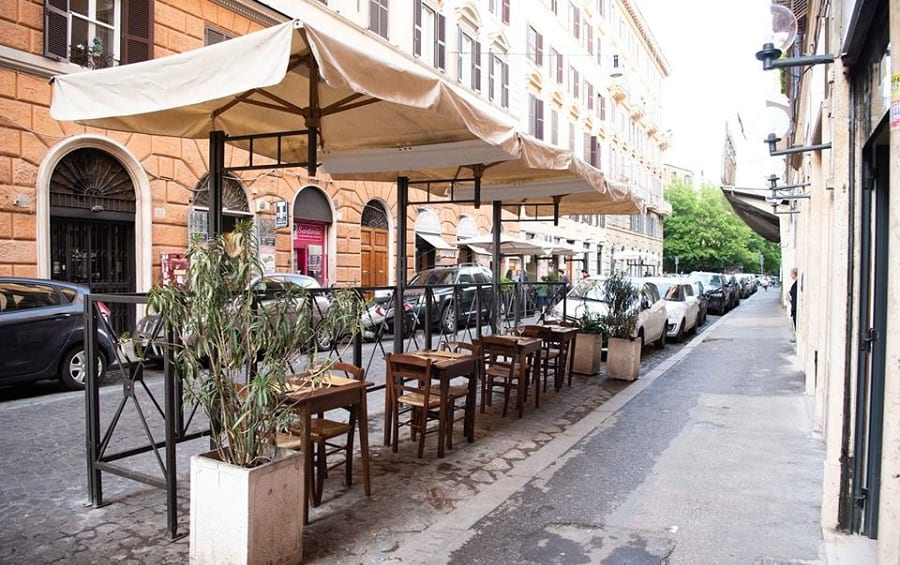 Peppo al Cosimato: Again in Trastevere to discover how an original place can exist in a high-density neighbourhood with lots of restaurants and clubs. The idea, which is unusual for Rome, offers customers a choice between seafood - especially local blue fish - and pizza. Meals can be enjoyed outdoors, on the street level seating area. 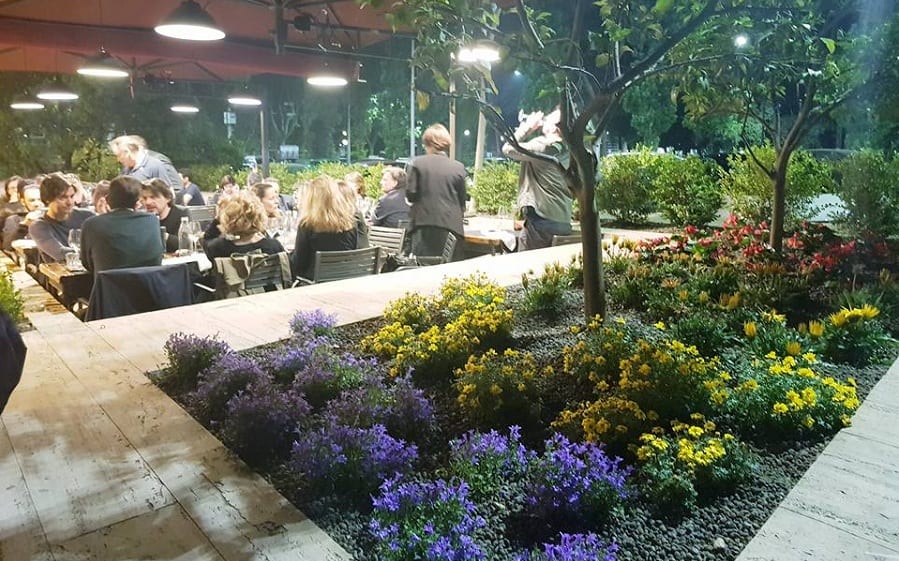 Barnaba: Recently opened the place already deserves Tre Bottiglie recognition assigned by the Rome 2018 of Gambero Rosso guide. After all, the team behind Barnaba, taking advantage of the potential of an ex-pub located a few meters from Pyramid of Cestius, is definitely no rookie in the business. In the Ostiense district Fabrizio Pagliardi and parters brought the soul (and bubbles!) of Remigio, combining an ambitious, amusing and particularly honest wine list, with delicious and convivial cuisine. Perfectly enjoyed on the streetside dining area (a truly great example of city outdoor seating), for lunch, aperitif and dinner. 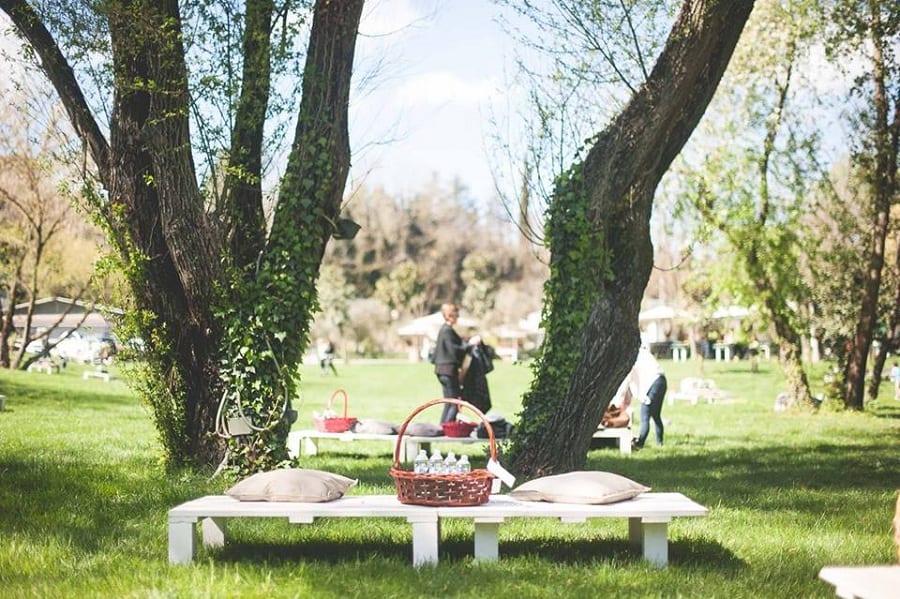 Profumo Spazio Sensoriale: This cocktail and "sensorial" tapas bar in the large green space of via di Villa Laucli (within the Parco di Veio) plays its food offer on fragrances, with meals – and more – served all day long. There's an outside dining area in the garden equipped with tables and umbrellas. The Sunday PicNic and Brunch formula served from noon provides customers with blankets and baskets for eating on the grassy lawn. 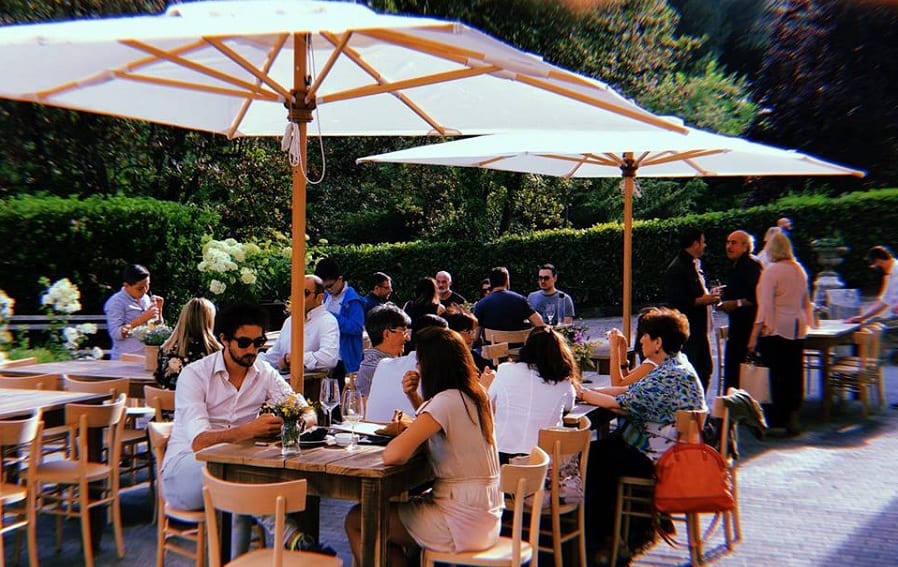 Casa Maggiolina: Just outside town, towards the Roman Castles, the co-housing project Casa Maggiolina has revived an old Thirties residence surrounded by the Parco Regionale del Tuscolo. meals can be enjoyed indoors or outdoors, including in the garden, but this fall the estate will also offer lodging, with apartments in the main building and rooms in the park. The kitchen also offers ancient recipes and cooking methods. 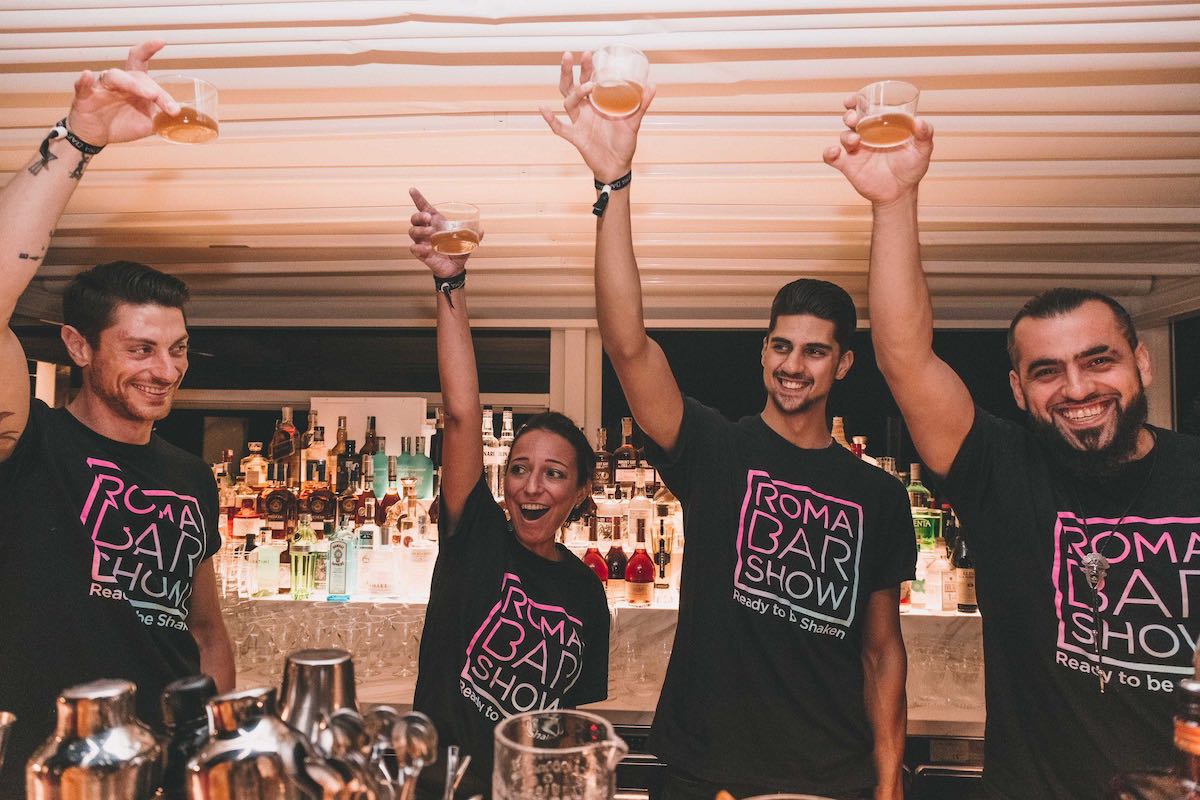 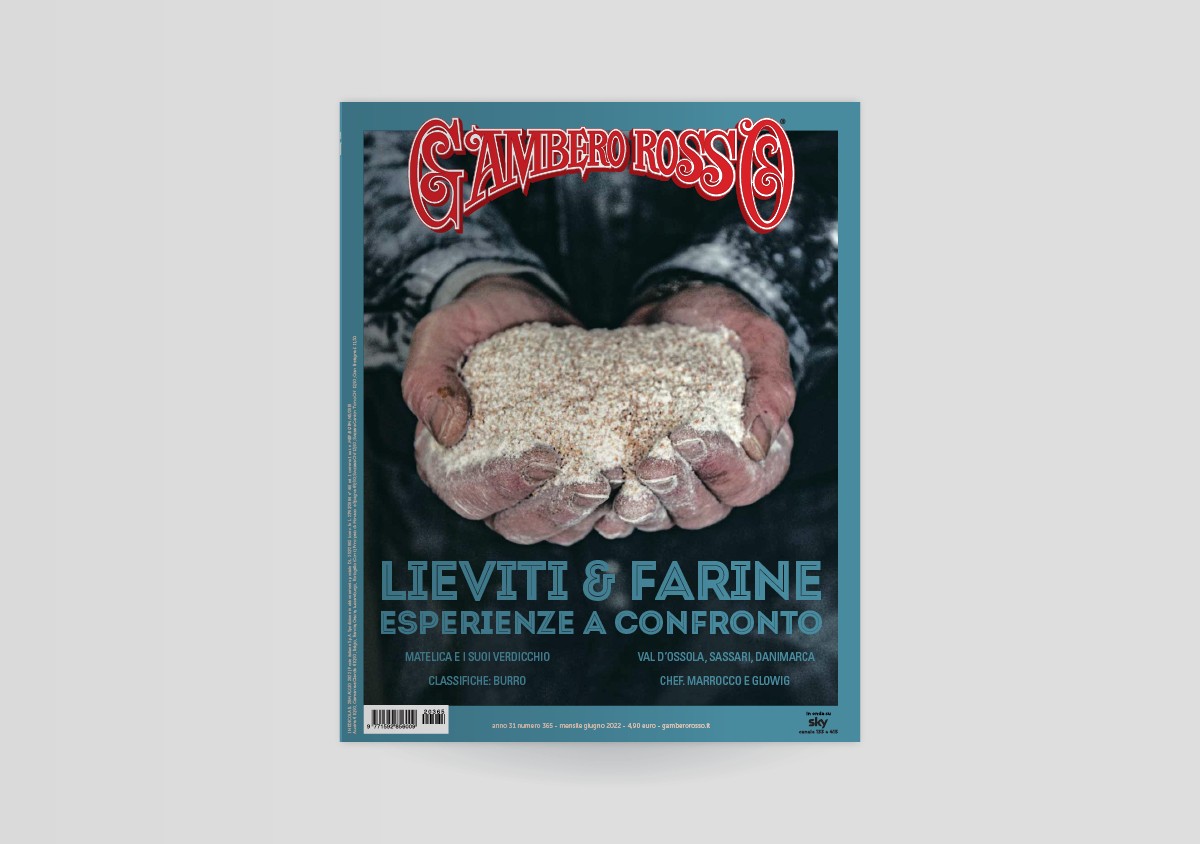 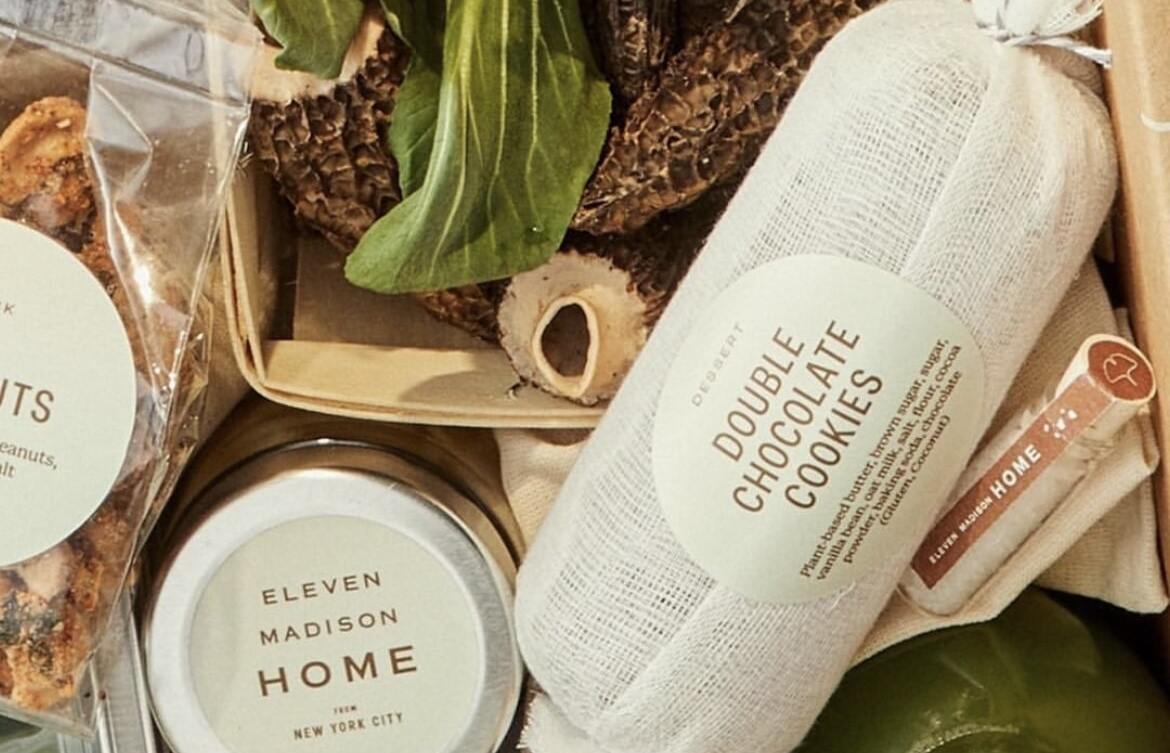 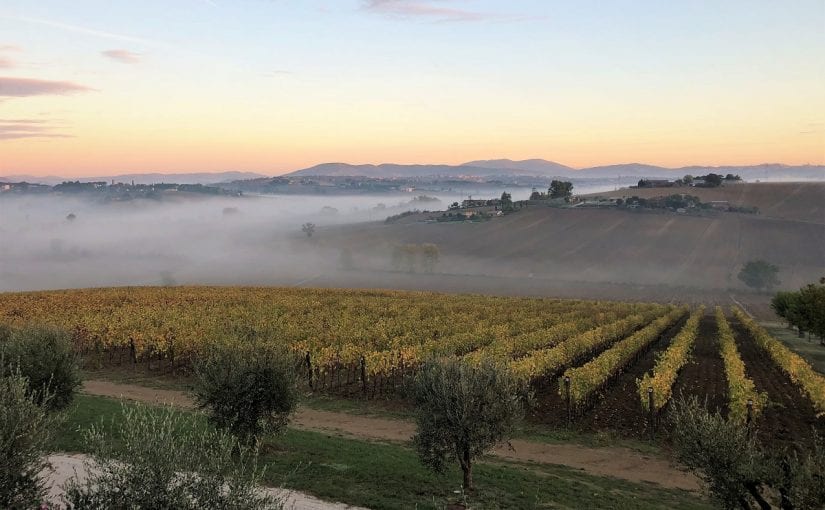 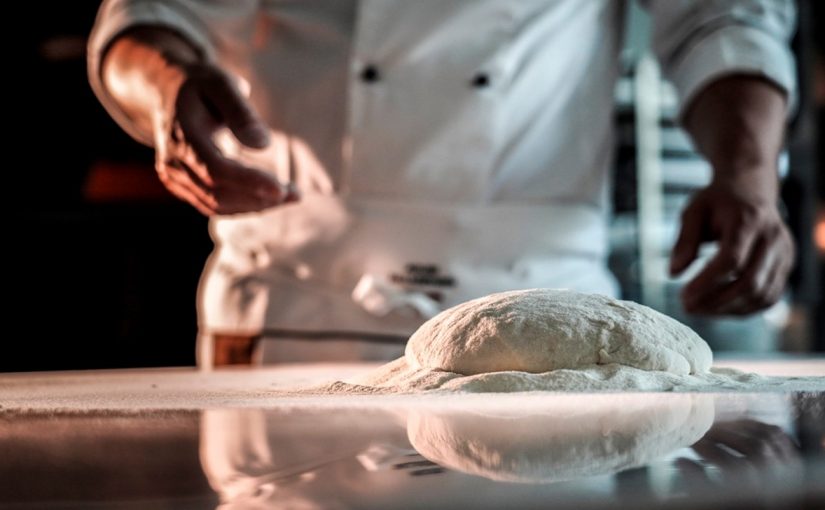 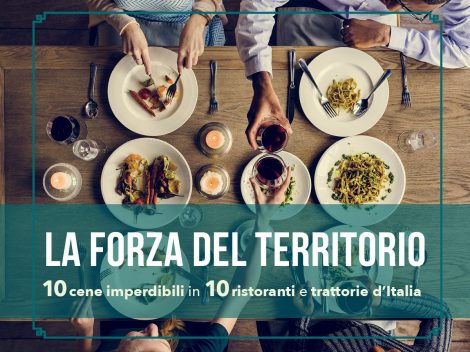 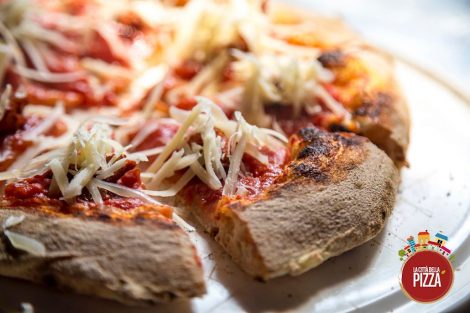 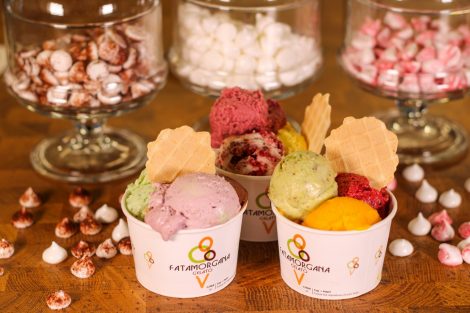 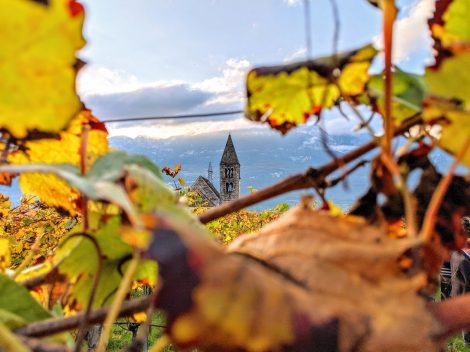 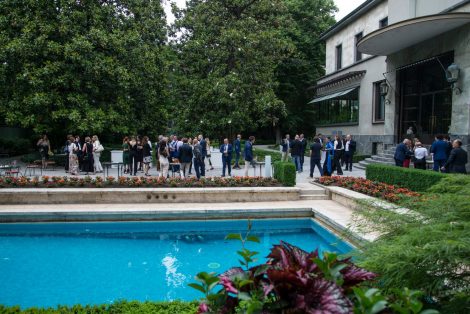 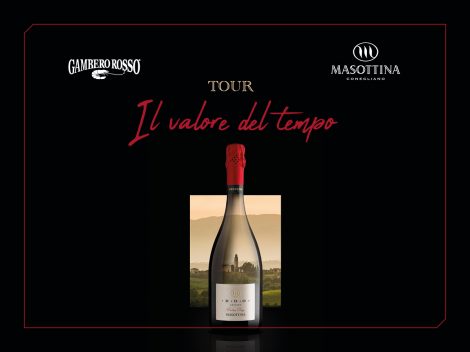